When Cary Welch was a young man, he spent much time in the Islamic and Asian wings of museums. As he recounted many years later, this was not necessarily because he was more attracted to that type of art, but because fewer people visited those sections, and so he could immerse himself in the beauty of the art, unencumbered by the hordes who hurriedly bustled in and out of the well-trodden sections of the museum. He could sit there at peace, contemplating these masterpieces, sometimes soaking in the intricacies of a minor detail, and at times, pondering the spirit of the composition as a whole.

For those of us who took Cary’s class on early Safavid painting in the early 1990s, we would remember most, not the slide shows of photographs he had painstakingly taken of so many works of art in so many places, nor the names of any one painter or painting. What left the strongest mark was being able to stroll after class into a room that housed part of his private collection, and follow his cue to spend the time to gaze at these original masterpieces, learning to pause, learning to contemplate and to appreciate, learning to see.

By that time, Cary had amassed an amazing collection of Persian and Indian art, parts of which he donated to Harvard (where he was the curator emeritus of Islamic and Later Indian art Art.) But when he was buying these pieces, there was little scholarship on them. His purchasing guide was his eye for beauty. Of course, he studied these works, and among other things, identified the various painters by their styles, as few of those artists signed their works, thus laying the foundations for this field of study. But he would understand much more from these paintings just by looking at them.  At one point, he had deduced the nature of a political turmoil in Safavid history by peering into the soul of a painter whose style had shifted – something historians would only ascertain later. He also collaborated with more traditional academic scholars to pioneer the field of Islamic and Indian art. Notably, with Princeton’s Martin Dickson, he authored the “Houghton Shahnameh,” a magnificent exposé on a folio of masterpieces, which decorated a 16th century manuscript of the 10th century Persian epic.

Cary Welch passed away 10 years ago, at the age of 80, while travelling in Northern Japan to discover the beauty of its picturesque landscapes.

So today, as we get bombarded by news, both fake and real, where nary a moment passes without an app notification vying for our attention, and breaking our concentration, as we hustle towards the next next big thing as quickly as possible, it would not be time misspent to take a moment and remember Stuart Cary Welch as a young man, sitting alone in the Met, losing himself for a few hours in the intricacies of a 16th century Persian painter’s brushstrokes. We might want to pay tribute to a person who took the path less travelled by, not for the destination to which it might lead, nor the difference it might make, but for the serenity of the journey itself. We might all wonder if sometimes, rather than move fast and break things, we might want to stroll slowly and appreciate them. 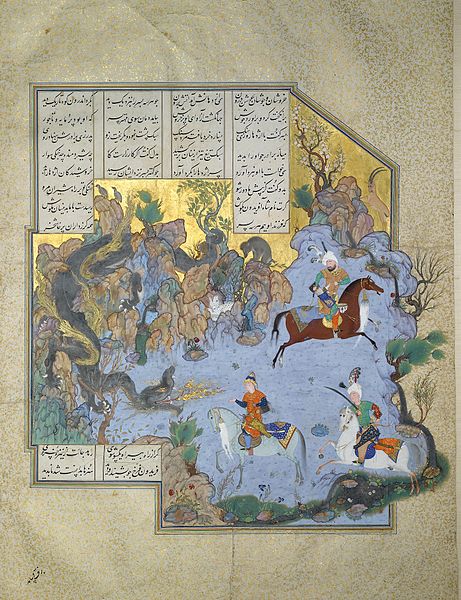 Folio from the Shah Tahmasp Shahnameh, attributed to Aqa Mirak, circa 1525-35, previously owned by Stuart Cary Welch. (In 2011, 3 years after Cary’s passing, the painting was sold for $12M.)

A version of this post originally appeared in a reunion edition of the Harvard Art Journal last May.